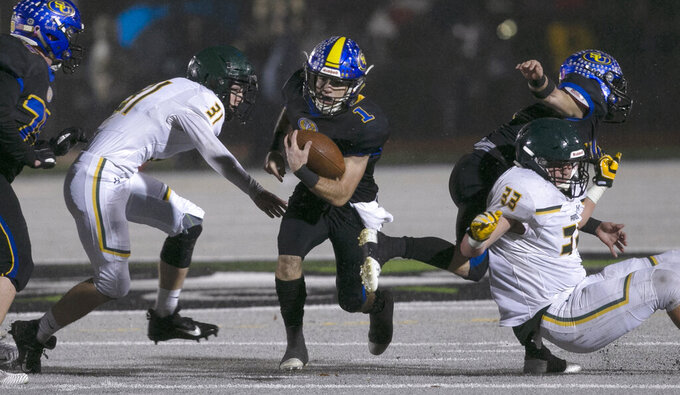 Sutter Union's Cory McIntyre, center, runs past Paradise's Josh Alvies, left, and Ashton Wagner, right, during the first quarter of a Northern Section Division III high school football playoff game in Yuba City, Calif., Saturday, Nov. 30, 2019. Paradise had an undefeated season and made it to the section championship game a year after the deadliest wildfire in California history that killed dozens and destroyed nearly 19,000 buildings including the homes of most of the players. (AP Photo/Rich Pedroncelli)

YUBA CITY, Calif. (AP) — Lukas Hartley stood in the endzone on Saturday night as raindrops mingled with his tears after his high school football team lost a division championship game.

“I didn’t cry this bad when my house burned down,” he said.

The senior running back was a leader of the Paradise High School football team one year after a catastrophic wildfire mostly destroyed their town, burning down roughly 19,000 buildings and killing 85 people. All but three football players lost their homes, forcing the team to forfeit a home playoff game and end its 8-2 season.

One year later, Paradise players were determined to finish what they started, completing an undefeated season and making it all the way to the Northern Section Division III championship game. But their season ended with a 20-7 loss to Sutter Union High School on a cold, rainy night.

“No one really knows how much they truly battled just to be at practice and to do what they did,” head coach Rick Prinz said. “They lost everything they owned a year ago. They are all living in different places. And to pull it together like this and help our community come together is truly amazing.”

Paradise High School has a football tradition, consistently fielding competitive teams. The school produced Jeff Maehl, a wide receiver who played for the University of Oregon in the 2011 BCS national championship game and later played for two NFL teams.

But it appeared the team might not have a 2019 season following the Camp Fire, the most devastating wildfire in California history. In January, Prinz had just 22 players left from what had been a 56-man roster. The school had relocated to an office building by an airport, and without a field to practice on, the team ran plays on a gravel lot.

But slowly, players began coming back. They included brothers Julian and Andrew Ontiveros. They moved to Redding after the fire, enrolling in a local school. But their mother, Erica Browe, said they were miserable and their grades suffered. Reluctantly, she agreed to let them return to Paradise and live with some friends so they could return to the school and play football.

Other players, like Blake White, struggled to stay in Paradise. His mother, Suzanne White, said the family lived in a trailer on a walnut orchard for three months. They had no sewer system, using an outhouse and driving a quarter of a mile (0.4 kilometers) just to shower.

While most people have left Paradise, on Friday nights in the fall many returned to cheer on the team.

“They knew that they were holding paradise in their hands, basically, helping to reunite the town,” Suzanne White said.

Hartley said the team could feel the community rallying around them, noting: “It was the talk of the town. There is nothing else to talk about because there is literally nothing else up there.”

Now that it’s over, he said he plans to be a firefighter once he finishes high school.

Emily Fleming, 46, doesn’t have a son on the team. But since she lost her home in the fire, she said she has moved between 50 and 60 times, staying in hotels and using Airbnb when she wasn’t living with friends or family members.

But she has been following the football team, showing up on Saturday night in the cold rain to watch the game.

“It’s what movies are made of. A team overcoming for the sake of their community,” she said. “They know it’s not about them anymore.”