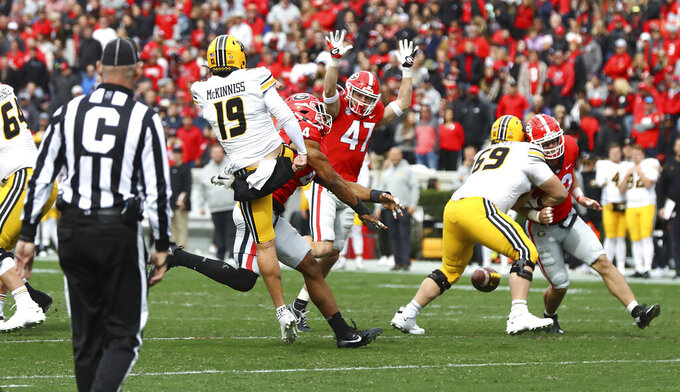 Georgia outside linebacker Nolan Smith (4) blocks a punt by Missouri kicker Grant McKinniss that went into the endzone for a safety in the first half of an NCAA college football game Saturday, Nov. 6, 2021, in Athens, Ga. (Curtis ComptonAtlanta Journal-Constitution via AP) 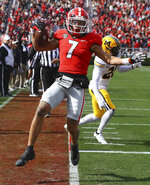 ATHENS, Ga. (AP) — With Missouri gearing its defense to stop the run, No. 1 Georgia relied on big plays in a passing game that was boosted by the return of quarterback JT Daniels.

Stetson Bennett passed for 255 yards and two touchdowns before giving way to Daniels, the former starter, leading the Bulldogs to a 43-6 win over Missouri on Saturday.

The game opened new questions for Georgia at quarterback while affirming the Bulldogs' season-long defensive dominance. Missouri was held to 273 total yards in Georgia's seventh game of the season allowing no more than 10 points.

“I think ... their game plan was not to let us run the ball,” Bennett said. “They were trying to stop our run game and when they do that we have to try to be explosive.”

The Bulldogs completed four passes of 31 yards or longer and seven for at least 15 yards. Wide receivers Jermaine Burton, who had a 47-yarder, and Arian Smith, who had a 35-yard scoring catch from Bennett, have returned from injuries to boost the unit's depth.

As usual, Georgia's defense led the way. The Bulldogs began the day leading the nation with 6.6 points allowed per game. Jamon Dumas-Johnson and Travon Walker had sacks.

“We were trying to stop the run,” Missouri coach Eliah Drinkwitz said. “... When you do that you’re susceptible to the passing yards."

Daniels opened the season as Georgia's starter before missing more than a month with a lat injury. He came off the sideline midway through the third quarter. His 7-yard scoring pass to Ladd McConkey gave Georgia a 40-3 lead.

“We’re blessed to have two quarterbacks who can go out there and both play at a high level,” McConkey said.

Daniels' second possession ended with an interception by Missouri defensive back Jaylor Carlies.

Missouri (4-5, 1-4) also could have ongoing questions at quarterback.

Tigers starter Connor Bazelak, who left last week's win over Vanderbilt with what Drinkwitz called a “soft tissue” injury, was with the team but did not play.

Freshman quarterback Tyler Macon passed for 74 yards and ran for 42 in his first start. He shared time with Brady Cook, who threw for 78 yards.

“We were just trying to see if one of them could really spark us and sustain us,” Drinkwitz said, adding “both of them did some really good things.”

Harrison Mevis kicked a 36-yard field goal in the first quarter to give Missouri a 3-0 lead, leaving him 12 for 12 this season before his third-quarter attempt from 48 yards hit the left upright and was no good.

Missouri: Tyler Badie, the SEC’s leading rusher, was held to 41 yards. Macon gave the Tigers a new look with his dual-threat skills. He had a 20-yard run in the first half and showed potential for more success as a runner. The Tigers drew a penalty while recovering an onside kick to open the second half, taking away a possible momentum-changing play when Georgia led 26-3.

Georgia: Linebacker Adam Anderson, the team's sacks leader, was suspended for the game while he is under investigation by Athens-Clarke County Police for an alleged rape. The Bulldogs lost another key starter during the week when left tackle Jamaree Salyer suffered a left foot injury in a practice. The Bulldogs' depth, perhaps the team's biggest strength, again paid off to keep the team on track for its championship hopes. Broderick Jones filled in at left tackle and the Bulldogs did not allow a sack.

Georgia is a lock to retain its No. 1 spot in the AP Top 25 and is assured of again claiming the top spot in the season’s second College Football Playoff rankings.

Macon’s 28-yard pass to Tauskie Dove set up a first down at the Georgia 3 in the final minute. With Smart leaving backups on the field, the Georgia defense held on three plays from the 1.

Richt announced this summer he has been diagnosed with Parkinson’s disease.

Missouri plays the first of back-to-back home SEC games when it faces South Carolina on Saturday.

Georgia closes its SEC schedule at Tennessee next Saturday. The Bulldogs have won the last four in the series, including a 44-21 home win last season when both teams were ranked.