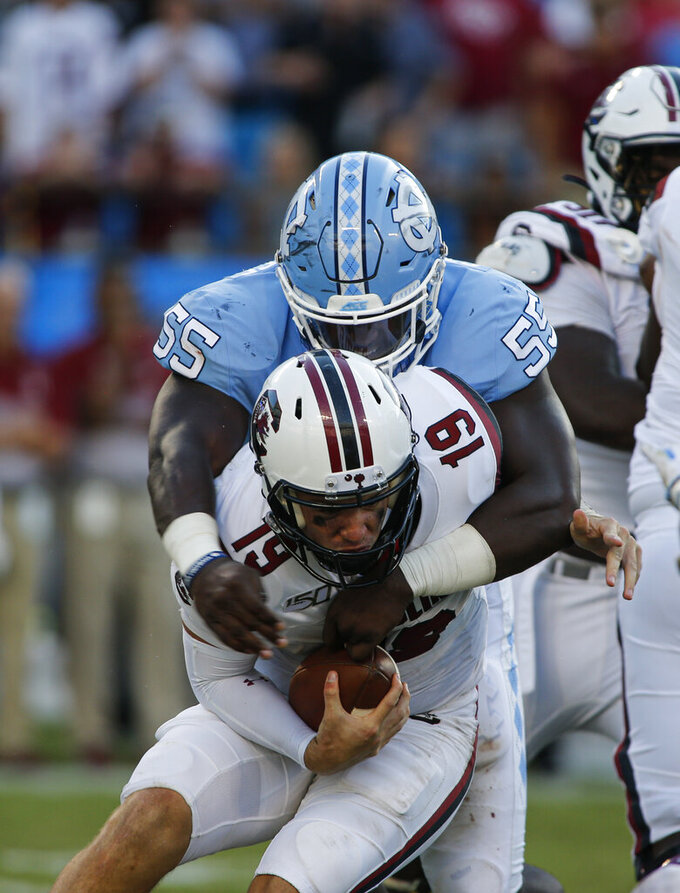 COLUMBIA, S.C. (AP) — South Carolina quarterback Jake Bentley has a foot injury that could sideline him all season.

Coach Will Muschamp said Tuesday that Bentley hurt himself on the final play of a 24-20 loss at North Carolina and the early prognosis was that the Lisfranc injury would take six to eight weeks of recovery.

If doctors determine Bentley needs surgery, the Gamecocks' senior quarterback who has started all but one game since the middle of his freshman year would miss the season.

"Just hurt for him during this time," Muschamp said.

Muschamp said Bentley's injury appeared to occur when he slipped on the turf as he threw a game-ending interception. Bentley said he was sore after the game.

Gamecocks trainer Clint Haggard talked with Muschamp on Sunday morning, saying afterward, "I think there's going to be an issue with Jake here." Bentley had a MRI that confirmed the injury.

Muschamp said he'll know by the end of the week if Bentley needs surgery. If not, he might be able to return to the field by late October or early November.

Still, it's a hard pill to swallow for a player who had started all but one of South Carolina's past 34 games and passed up leaving for the NFL to play a final season.

Bentley has not used a redshirt season since arriving three years ago. Muschamp said nothing about the player's future beyond this season has been discussed.

"It's just a tough time right now," he said.

With Bentley out, Hilinski has to step in quickly to revive an offense stung by its loss to the Tar Heels.

Hilinski is a 6-foot-3, 230-pound , four-star prospect from Orange, California. He took part in the Elite 11 quarterback camp and played in the All-American Bowl before arriving at South Carolina last January.

Hilinski's teammates expressed confidence he can get the Gamecocks back on track.

Asked what Hilinski said when told he was starting, Muschamp answered, "Let's go."

Joyner, now the second-string quarterback, said Hilinski appeared confident in getting snaps with the starters at practice this week.

"Next man up. It is what it is," said Joyner, who was used at receiver last week. "I'm sorry it happened to Jake."

Muschamp said Jake Bentley has continued to attend workouts and meetings to help prepare the younger quarterbacks for moving forward.

"That's just the type of person he is," the coach said.

Offensive lineman Donnell Stanley, who is playing a sixth season because of injuries earlier in his career, talked with Bentley on Sunday and told him the team was 100% behind him.

"I've been in his shoes and know how he feels," Stanley said.

Muschamp said Hilinski is a hard worker who has quickly picked up South Carolina's offense. "He's prepared himself for this opportunity," he said.

Hilinski will have his hands full going forward. While South Carolina is heavily favored to defeat Charleston Southern, No. 2 Alabama comes to Williams-Brice Stadium on Sept. 14. The Gamecocks also play at Georgia on Oct. 12 and host Florida a week later, all games during the timeframe that Bentley will be out.

"We've just got to protect" Hilinski, offensive lineman Stanley said. "And let him do what he does."