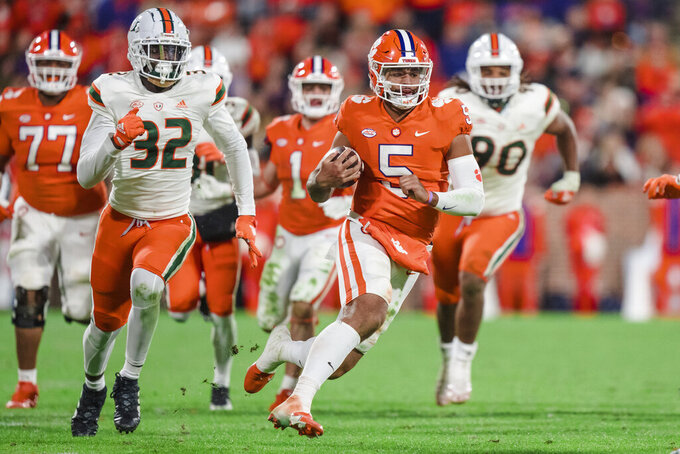 Clemson quarterback DJ Uiagalelei (5) runs with the ball while pursued by Miami defensive lineman Nyjalik Kelly (32) in the second half of an NCAA college football game on Saturday, Nov. 19, 2022, in Clemson, S.C. (AP Photo/Jacob Kupferman)

Swinney said Sunday that Uiagalelei was not the reason for the 10th-ranked Tigers' 31-30 loss to rival South Carolina ON Saturday.

Uiagalelei completed just 8 of 29 passes for 99 yards in the rivalry loss. He threw a interception in the second half as the Tigers were trying to rally for the go-ahead score.

Swinney said Uiagalelei's receivers had a number of drops and the defensive backs were beaten deep by South Carolina quarterback Spencer Rattler at crucial moments.

“He's still the starter,” Swinney said. "He doesn’t play safety or catch the ball. He’s got his share of things he can do better. But he will definitely start the game.”

Uiagalelei appeared as if he had found his form through Clemson's 7-0 start with 17 touchdowns and just two interceptions. But he has thrown at least one pick in the Tigers' past five games and was benched against Syracuse and Notre Dame for freshman Cade Klubnik.

The Tigers (10-2) look for their seventh Atlantic Coast Conference crown in the past eight seasons when they face the Tar Heels (9-3) on Saturday.