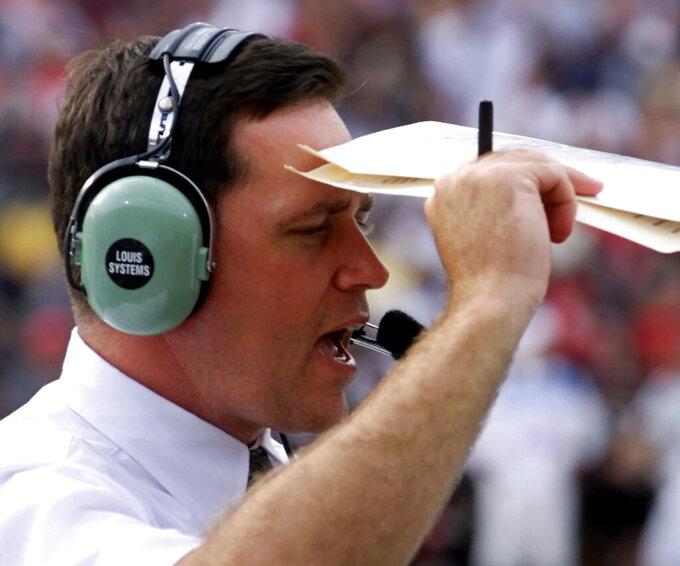 FILE - In this Sept. 4, 2000, file photo, Army head coach Todd Berry works on the sidelines during the first half of an NCAA college football game against Cincinnati in Cincinnati. Twenty years later, former Army football coach Todd Berry still gets choked up thinking about that Sept. 11, 2001, day and the terrorist attacks carried out not only on the twin towers at the World Trade Center but at the Pentagon, and in a field in rural Pennsylvania. (AP Photo/Al Behrman, File)

That September day 20 years ago struck an emotional chord, still does for Chad Jenkins, then a senior quarterback at Army.

“It was utter shock,” Jenkins said. “I remember also having a feeling of adrenaline pumping through the veins trying to recognize the magnitude of the event at that time. There was just this recognition at that point that the trajectory of every single cadet at West Point was going to drastically change once we graduated. Us being the senior class, we recognized from that Tuesday morning forward it was no longer a peacetime military. We were going to go out and do exactly what the military academy was designed for. We were actually going to do it for real."

Like an awful lot of Army players this century and before, when he was recruited Jenkins was sold on playing at the top rung of college football on a big stage, even though he thought West Point was in Indiana, not 50 miles north of New York City. Fighting a war overseas or dealing with post-traumatic stress wasn’t a thought for the determined 175-pound firstie. After sophomore year, he remembers being gung-ho and ready to serve as an infantryman.

“I wanted to be with the best of the best, and it was the 75th Ranger Regiment,” Jenkins said.

Less than two years after he helped lead Army to a win over Navy in his last college game, Jenkins was on one of his four deployments to Iraq when his platoon, attached to the 82nd Airborne Division, was the first on a grisly scene. Insurgents had shot down a Chinook transport helicopter, killing 16 American soldiers.

That, too, is etched in his mind. Jenkins received three Bronze Stars for his service and now is back home in Dublin, Ohio, after a four-year stint with the FBI. He runs a leadership consulting company and operates a family-owned government contracting business.

“I look back at it now, I’m not going to lie, I get emotional about it because it’s not just the day in particular,” said Jenkins, who was diagnosed with PTSD during his first deployment in Iraq and has coped through therapy with help from the Veterans Administration. “It’s the totality of the trajectory of those deployments, of the scars of combat, the invisible wounds of combat that are still fought by me daily and the lifelong recognition that the most horrendous thing on this earth is combat. Sending men and women to go experience war is the most unfathomable thing. It ought to be looked at that it’s the absolute last choice that we make.

“I’m not saying that it’s a choice that’s never to be made. I think 9/11 is a perfect example. I think we needed to hunt down those who did that, but I also think when we sign our sons and daughters up to go fight our wars it better by God be the last option.”

Jenkins and his wife have a 13-year-old daughter, Aubrey, and an 11-year-old son, Bryce. He calls them God’s two greatest gifts and he’s making sure they know all about what happened in the world two decades ago.

“It’s talked about,” Jenkins said. “My son, he’s got these who-is books, what-is books, and one of them is 9/11. We’ve read that together. We talk about, not the specific events, but a big emphasis on mental health and talking about those events with our kids to kind of teach them the emotional, the psychological, the mental aspects of life and use that as teachable moments.”

Kellen Grave de Peralta, a punter for Navy, was born July 25, 2001. His mother Tiffany, worked at the Pentagon as a human resources officer, though she was on maternity leave with him and wasn’t in the building on Sept. 11.

“I think once I reached a certain age, maybe 11, 12, 13 years old, a lot of that stuff, it started to hit me,” he said. “Like, wow, my mom could have been in the building that day. She could have died, she could have been hurt, and it’s just crazy to me, because I have all these connections with things like that, and now I have even greater respect for both of my parents because of the things that they’ve done prior to that day and after that day.”

Ricardo Grave de Peralta, Kellen’s father, is a former Navy SEAL who worked for the FBI for over 20 years and he has his own connection to 9/11. He was in Virginia and training with an FBI SWAT team that day.

“Once he received word of the attacks, they immediately raced back to D.C., and he actually ended up passing the Pentagon that was on fire at the time,” Grave de Peralta said. “Two weeks later, he was assigned to the 9/11 investigation and spent the next two-plus years helping put four al-Qaida terrorists, who were part of the 9/11 plot, in Guantanamo Bay.”

Although Grave de Peralta was just a newborn at the time of the attacks, he’s come to understand the enormity of what happened that day.

“When you start making friends in high school, and you start telling them about all the things that your SEAL FBI SWAT dad has done, they kind of start losing their minds,” he said. “Even they helped me realize, like, ‘Do you know how incredible that is?’”

Prior to the start of classes junior year, cadets at all three service academies can walk away without any military obligation and never look back. Once junior year starts, they’re locked in.

When Army coach Todd Berry addressed the team at a noon meeting on Sept. 11, 2001, he was caught off-guard by the queries from the players.

“While I had already kind of seen this metamorphosis prior to 9/11 happening, it was so apparent in that meeting. It just was so clear just how that one decision (to attend West Point) impacted the way that they kind of viewed things. It was just really, really unique.”

Army lost its season opener in 2001 at Michie Stadium by three points to Cincinnati and the Sept. 11 atacks occurred during the ensuing bye week, giving the Black Knights time to deal with the stunning turn of events as they turned their focus to playing UAB on the road.

“I did not think we would play well," then-coach Todd Berry said. “There had been way too many distractions. I call them peripheral opponents. At most universities, it’s women, it’s drugs, frat parties, all these other kinds of things. At the academy, you don’t have a lot of peripheral opponents because it’s just the nature of the academy. Every cadet at that point in time had to check who they were. Everything had changed for them.”

Except one thing. They kept practicing, even on 9/11.

“I give credit to the coaching staff that day for saying, ’All right, if you guys want to practice, let’s practice because on the battlefield there could be bad things taking place and there’s a lot of nuances going on around the battle space, but you always focus on your mission at hand, your mission and your task,” Chad Jenkins, a senior quarterback on that team, recalled. "And that day as an Army football player, our mission was to prepare ourselves for football games, and the way to do that is to continue practicing and to continue staying on that thought process.

"I think it led to that mindset of what needs to be carried in combat. That’s the exact same thing. Maybe things aren’t going your way, but that doesn’t mean you can pull pitch and call it quits.”

Army flew to Birmingham, Alabama, dealt with bomb-sniffing dogs on buses to planes, and the night before the game the Black Knights had to evacuate their hotel three times because of bomb scares.

“I don’t know if they were real or not," Berry said. "Trying to sleep that night was just an impossibility.”

UAB crushed Army 55-3, its worst loss this century and fifth-worst in academy history. That didn't stop the hometown fans from giving the Black Knights a standing ovation.

“I stood there at the end when they did that. It was kind of a proud moment," Berry said.

Berry often gets a bad rap for his record as coach at Army, which included a winless season. He was in his second year at West Point when the terrorist attacks occurred and he proved to be the right man for the job, taking charge like a general in civilian clothes.

“Todd was just fantastic how he handled the entire situation with our team, giving them the space, letting them talk. He was such a pillar,” said Bob Beretta, who worked at West Point for more than three decades and is in his first year as athletic director at Le Moyne College in Syracuse, New York.

“All these young men, their lives changed in the blink of an eye,” he said. "They knew they were going to go out and defend our nation's freedom. They needed to be around each other. No one knew what all this meant, but they were in it together and needed to be together in that moment. Todd led those young men through the most difficult period of their lives.”

Beretta said he second-guesses himself a little bit looking back. He was in control of media opportunities and was swamped with requests, big distractions for the team.

“Obviously, there were tremendous distractions that week with just the events themselves, but there was just a horde of media that wanted to speak with our football players,” Beretta said. “I thought maybe I should have limited the media opportunities but I felt it was very important that the nation heard from these young people because I knew they would represent the United States Military Academy and the United States Army in the best way possible and I felt that the nation really needed to hear from them because they would feel what I was feeling — this tremendous confidence.”